A downloadable game for Windows and macOS

I made a dating sim where you can romance the monsters from Doom! "Doomed Love" features:

- absolutely no gore or violence!

Really cute game about tormenting the souls of the damned with what they'll never have... LOVE!!!

An unironically sweet little game despite its ironic premise. Spotted a typo in one of Cyberdemon's lines ("Fesitval") and another one in Demon's path ("Phonos lab").

who is the fourth demon

Worth it just for the music, fantastic job on a chilled E1M1 before the samples kicked in 😁

Hi, David. I liked your idea to turn the world of the game "Doom" into a completely new one. Who would have thought of dating demons))) Thanks to your work, you can now empathize with demons even when playing the original). Is there an idea to create something similar, for example, the original story "DOOM" in the genre of "visual novel"? In fact, I am from Russia and the first in my country to translate your novel into my native language! You've done a good job even in drawing sprites and backgrounds. I wish you inspiration and new creations! Good Luck!

This is almost like the Bizarro World version of Doki Doki Literature Club: Instead of being cute girls and horrifying twists, it's horrifying demons in a cute, wholesome dating sim. (Though, the demons are actually also cute.) In a very strange way, it's the most classic ren'ai game I've seen in a long time: Despite the parody premise, it's a straightforward dating sim where the character personalities clearly map to classic VN archetypes, ex. Cacodemon is the bossy but well-meaning leader. The music is great, the art is strangely endearing, making even the demons oddly adorable, and the writing is surprisingly good; it's easy to make shallow parodies, especially with VNs, so it's refreshing to see something that's both a parody of traditional romance VNs and a well-done example in its own right. There's also plenty of humor mined from the DOOM setting, from the Revenant being a dedicated trumpet player to the Mancubus' flamethrower-hands making everything difficult. I also enjoyed the Cyberdemon's cameo role as the Mean Girl!

Unexpectedly cute and a lot of fun, but I think one of the best things about this game is its version of that iconic DOOM artwork on the title screen, which looks like a horde of demons trying to ask Doomguy to the Icon of Sin Festival. Did one of those demons make him a mixtape?

you know, when I released this game I saw some VN fans angry at me because they thought I was making fun of their genre without actually playing it. So this comment really warmed my heart, thank you.

I'm glad my comment had such a positive effect! Visual novels, like any niche genre, is easy to mock from an outsider's perspective, so I can see why those critics might have been on the defensive, but that's not the right mindset for a fair critique. I've seen enough low-effort parodies and "wacky" VNs that I usually skip over anything that even sort of seems like one, but I enjoyed Doomed Love and I'm glad I played it. Thanks for putting it (and yourself) out there!

After two years on four different dating apps with no matches, let alone human contact, who knew I'd find love here, in hell of all places! Thank you for this. You've changed my life forever!

Hardcore to all Hell! My heart was ripped and torn... on who to decide to spend the Icon of Sin Festival with! Love to see what else is in store, dev. Keep it up!

This is so cute, thank you for making this game! <3 The music is amazing.

Instead of conquering Earth the demons instead decided to host a visual novel romance sim. What could have been

I unfortunately can't play this due to having Linux instead of Windows or MacOS.

I have not tested it in Linux, but the Windows build should work in Linux.

How do I get it to run in Linux?

I’m gonna level with you, I know literally nothing about Linux, so if it’s not obvious then I can’t help you. Sorry!

Wine. An undeniably useful asset whenever you come into contact with linux. Also there's a program that let's you run windows programs on linux, can't remember what it's called.

I'm almost 30 and I have no shame to be playing this. The first time I played Doom was on the SNES port and even though it looked hideous it hooked me up real hard and I gotta say... this is amazing.

The writing is sensible and cute, the characters have a lot of charm and it's quite endearing with all the remarks the characters do to the enviroments of Mars and Hell. This is a great work.

Besides using Doom characters, this is the kind of stuff that could easily gain traction with completely original characters and references to retro shooters. Love this.

It has demons, romance, and great artwork. What's not to like? 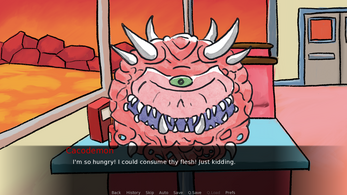 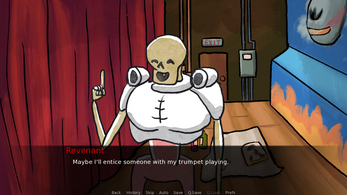 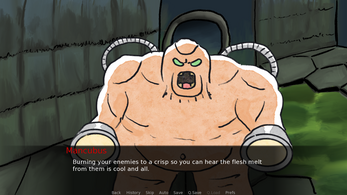